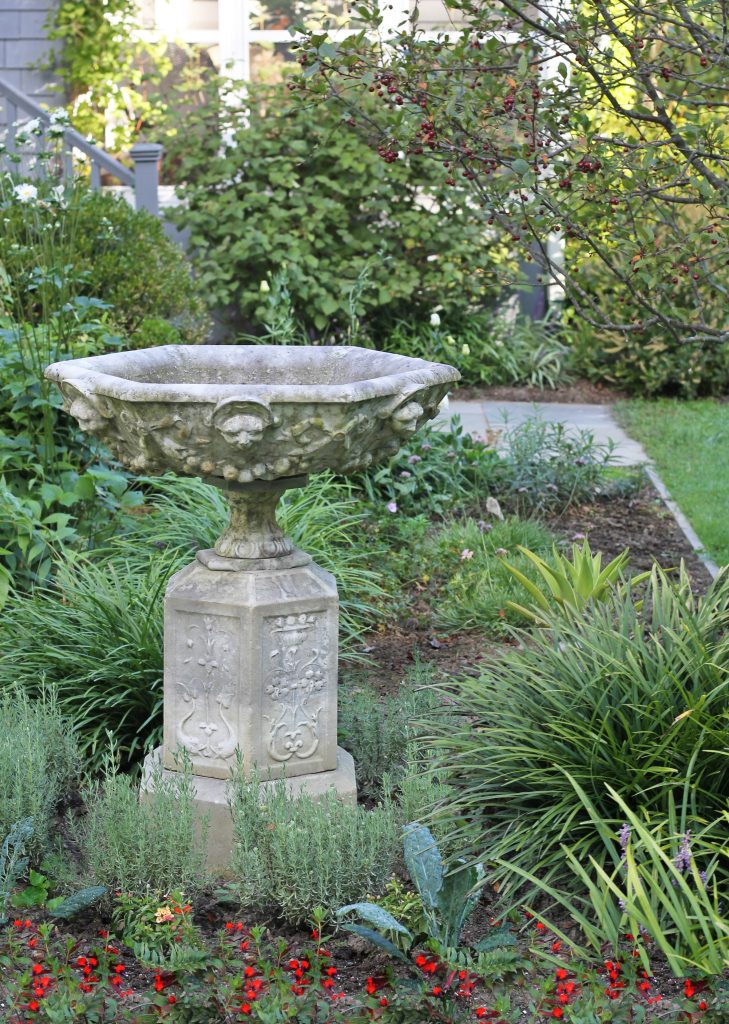 We may never know the full story behind the fountain that sits in my garden now, but we have an account that my father wrote when he purchased it from Mrs. Rionda — for $20.

Mrs. Rionda lived in a house overlooking the Hudson River along The Palisades in Alpine, NJ.  The adjoining estate owned by her husband’s family, called Rio Vista, had a few small cottages they rented to young families like ours. The main house, like so many along that stretch of the Hudson, was appropriated through eminent domain and torn down when The Palisades Parkway was built in the 1950’s.

I remember the grounds around our cottage in Rio Vista being well groomed, with trimmed shrubs and a stone-lined lagoon, thanks to the gardeners Tony and Mr. Jim.  But in an area off the beaten path there was an overgrown pond with a neglected fountain standing at the center of it.

When my parents planned to move, my father asked Mrs. Rionda if he could buy the fountain from her. She was only too happy to sell it to my parents.

My father later typed a transcript of his conversation with Mrs. Rionda about the fountain, in which she told him that her great aunt had purchased it in Florence Italy in 1905 as a wedding present for her brother. She said there were documents, no longer in existence, attributing the fountain to a Rennaissance school. Later my father contacted The Metropolitan Museum of Art and, from photographs, they attributed it to the late Renaissance (1600’s).

Our family moved from Alpine to Montclair, NJ, where the fountain sat in a corner of our backyard unassembled. When we moved to Weston, CT years later, it still remained unassembled. Finally, when my parents moved to Sharon, CT in 2000 their dream of seeing the fountain returned to some semblance of its former glory was realized in their garden.  They had it assembled and planted a rose garden around it.

When my mother sold her home in Sharon in 2016 and my father had passed away, I asked if I could take the fountain and give it a home in my own garden. Everyone agreed and was glad to keep it in the family!

Weighing as much as it does it requires assistance to lift any piece of it.  After leaving it unassembled in my yard the first year, we finally assembled it to its full height — and it stood 7’ off the ground.  We made the decision to remove the center pedestal thinking the scale works better in our space, but we gave it a place of honor in the garden and it can be added back in the future. We placed the shorter fountain, shown in these images, next to a newly planted crabapple tree surrounded by an herb garden. Last summer we had a cement base poured for it with plumbing lines, but we haven’t hooked up water to the fountain yet. For now it’s just pretty to look at.

The fountain has truly become a family treasure. Everytime I look at it I think of Rio Vista, my father, Tony and Mr. Jim, and so much more!

One thought on “Family Treasure by Dorian Winslow”