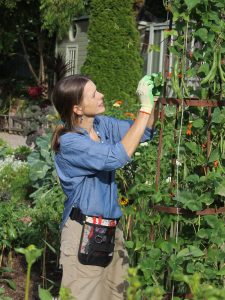 The vegetable garden at Bunny Williams’ property in Falls Village, Connecticut, where professional gardener Tricia van Oers is employed, is all about relationships.

Bunny calls Tricia ‘the soul of the garden’ and says she has never eaten so well. Tricia is equally complimentary of her employer. “Bunny lets me feel a sense of ownership of the garden. She allows for playfulness and freedom within the established design of the garden,” says Tricia.

Their paths first crossed in the summer of 2018 when Bunny was looking for a new head gardener. When Tricia’s husband Robert Reimer was hired by Bunny Tricia was brought on to fill the position of vegetable gardener. Not having met before – Bunny a high profile interior designer in NYC and Tricia a classically trained Dutch musician and Master Gardener – the two struck up an easy partnership.

Tricia spends one day a week at Bunny’s vegetable garden; the early part of the day consists of cutting flowers and harvesting vegetables. Bunny purchased the property with its 19th-century farmhouse and rolling hills 37 years ago. The process of transforming the 12-acre garden from just two perennial borders, as she describes it, to a series of garden rooms with seating areas, vistas, hidden corners and walking paths, has been a passion of Bunny’s. She grew up in Virginia where she learned to love the land, and the style of the Falls Village property is reminiscent of her childhood.

The vegetable garden is laid out in a series of symmetrical raised beds in a space approximately 70’ x 80’. To one side sits a greenhouse filled with tropical plants and succulents, and to the other a working barn. In the center of the garden is a welded sundial and there are large containers with fig trees growing in them.

The fig trees were very old and not producing well so they were repotted and greater attention was paid to watering and feeding. Now, a season later, they are overloaded with figs. Tricia delivers trays full of the fruit to Bunny’s husband John, who turns them into fig preserves because “there’s nothing more enjoyable in the middle of winter,” he says.

Carrots, celery, fennel and haricot verts are all new additions to the vegetable garden. Tricia grows beets, arugula, head lettuce, parsnips, four varieties of kale, specialty cucumbers and numerous varieties of heirloom tomatoes. “We had a bumper crop of peas this year,” says Tricia, as well as of potatoes and onions. The bright red flowers of the scarlet runner beans are not only pretty but they attract hummingbirds and the dried beans make a delicious winter chili.

The vegetable garden also includes many flowers which are used for floral arrangements, a delightful part of Bunny’s interior design aesthetic. Antique garden urns are positioned throughout the house and Conservatory (converted from an old barn on the property) and are filled once a week with fresh flowers cut from the garden and wild flower fields. Some edible plants, such as cardinal basil, with its burgundy foliage, and kale, mint and parsley,  find their way into flower arrangements as well.

Tricia came to the United States from The Netherlands on an international scholarship to accept an assistantship at Indiana University’s Early Music Institute. She later became a Master Gardener through the Cornell Cooperative Extension program in Dutchess County, NY.  “As a child in Holland I had a school garden plot and won First Prize when I was 11 years old,” says Tricia. “I used to make bouquets and give them to my grandmother.”

She ended up staying in the US after she met Robert at a garden tour he was leading. “He said I asked lots of really interesting questions,” says Tricia about that first meeting. Two and half years later they were married. In addition to working at Bunny Williams’ property Tricia works two days a week at a potager garden in Roxbury, CT, one day at a native garden in Greenwich, CT, and she cares for a large property in Salisbury, CT, which includes a vegetable garden as well.

What does Tricia do in the winter? She pours over organic seed catalogs, planning next year’s gardens —and gets back to her music.

A Garden for Sharing: WSS and Other Charities

Bunny believes in sharing her garden with the public as a way of showcasing the work of her gardeners and providing a place for others to learn. “You learn so much from looking at other people’s gardens,” she says.

She also opens her garden as a way to give back to her community. Her garden is open to the public to benefit charities such as The Garden Conservancy and others.  In 2001 she hosted the first Trade Secrets plant sale to benefit WSS (Women’s Support Services).  Its success meant it quickly outgrew the space. It has since moved to Lion Rock Farm in Sharon, CT, where it attracts over one thousand attendees and more than 50 exhibitors to its garden antiques and rare plant sale each spring.  The success of Trade Secrets has enabled WSS to significantly expand programming, increase their capacity to shelter victims of violence, provide free prevention programs throughout the schools in the area and launch new efforts like their Boys + Men initiative.

Dorian sat down with Bunny Williams and Tricia van Oers for the writing of this article. Tricia is wearing Womanswork Weeder Gloves  and Hip Holster Tool Belt in the photos.  All photos taken by Dorian. 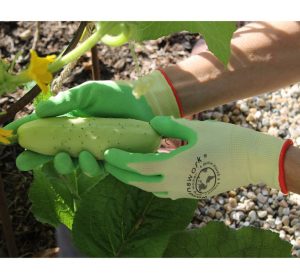 One thought on “Bunny Williams and Tricia van Oers: A Gardening Partnership”