I first learned about North Georgia candy roaster squash at our farmers market last November. A local farm, Harlem Valley Homestead, grows them and had them for sale. They suggested I try making a ‘pumpkin’ pie with it. Since pumpkin is a type of squash too, in the same genus– cucurbita — it’s a reasonable suggestion.

I liked the novelty of it so I went ahead and bought one.  I read that this squash was originally cultivated by the Cherokee Indians in the Appalachian Mountains of southeast USA. It is not usually available in grocery stores, so look for it at farmers markets or grow your own!

One squash goes a long way and I was able to bake two or three pies with mine.

For a recipe I found something online with no added sugar, and then I improvised here and there.  The host was using a recipe for pumpkin pie, substituting the candy roaster squash for the pumpkin. He pointed out that most commercially available pumpkin pie filling in a can is really made with butternut squash, not pumpkin!  Butternut squash is also in the cucurbita genus.

Step one: Make your pie crust or purchase a premade one. I make a few at once and freeze them.

Step two: Cut your squash in 6 to 10-inch pieces, cut each piece in half and remove seeds.

Step Three: Put pieces in the oven face up in a pan with about an inch of water in it. Bake at 350 degrees for 45 minutes to an hour or until it is tender when you poke it with a fork. Let the squash cool after removing from the oven. Use a spoon to scoop the squash into a bowl.

Step Four: Put about 15 oz. of squash in a mixing bowl. Add the following ingredients to the bowl and mix with an electric mixer:

14 oz. can of sweet condensed milk

Step Five: Pour mixture in the pie crust. Bake for 15 minutes at 425 degrees and then another 35-40 minutes at 350 degrees. Test whether it’s done by inserting a fork into the pie about an inch from the edge. If it comes out clean the pie is ready.  Serve with whipped cream! 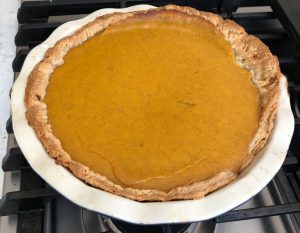 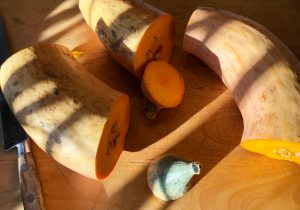 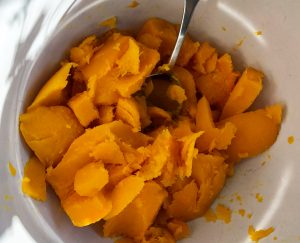