The Hunger Moon and Other Moons 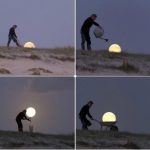 The Hunger Moon and Other Moons— In The Old Farmers Almanac there is a name given to each full moon of the year. These are mostly adapted from early Native Americans who kept track of the passing seasons and tied their calendar to the full moons.   I was reminded of this last week by a friend who told me we were in “The Hunger Moon”.  He was helping me understand why one of our hens had been taken earlier in the week by a wild animal in broad daylight.  The Hunger Moon falls at the end of winter when game is scarce and predators are particularly hungry.  Names for the moons varied between different indigenous peoples, but they carried similar meanings.  The Hunger Moon was also known as ‘Little Famine Moon’ and ‘Bony Moon’, and in those days the threat of famine after a long winter was real, for people as well as for animals. 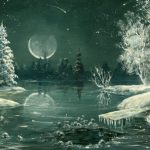 I spoke on the phone today with Jessica Prentice, one of the founders of the locavore (local foods)movement in the San Francisco Bay area.  She’s also author of Full Moon Feast, Food and the Hunger for Connection, in which she uses the lunar calendar as an organizing principle to talk about food.  Explaining her fascination with moon names she said, “As I started to read about the moon names of different cultures I was struck by how the names reflected something profound about their culture and their food system”.  She added, “abundance of food and scarcity of food are both cyclical.”  People in pre-industrial times were acutely aware of this and their moon names reveal this.  Most of us, on the other hand, have lost our connection to those cycles. 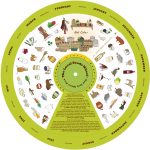 Jessica has also published a series of food wheels that illustrate the fresh foods available throughout the year in different parts of the country. I own “The Local Foods Wheel” for the NY Metro region and I noticed that she lists the moons associated with each month on her foods wheel.

Here are the 12 moons listed on Jessica’s foods wheel.  The definitions are reprinted directly from her website. For longer descriptions you can visit her website or purchase her book Full Moon Feast. Her book is available pretty widely, but if you order directly through Jessica you can get a signed copy.

Sap Moon (March)— The first drops of sweet nectar from tree taps was living proof that nature is in a constant state of change and flux, and that there is a lot going on underneath the surface. There are forces moving that we cannot even begin to perceive.

Egg Moon (April)— On old-fashioned family farms, hens lay fewer eggs during the winter when nights are long and days are short, and more eggs when there is more daylight. The Egg Moon means that spring is here, the days are longer, and the hens are laying more and more eggs.

Milk Moon (May)— The cows have had their calves and are feeding on the rapidly growing spring grasses in the fields.

Mead Moon (June)– Mead was the Norse and Old English version of a drink fermented from honey, and though many modern Americans have heard of it, few have tasted it.

Wort Moon (July)— Wort is the old fashioned, Old English word for herb. Late summer was the time of year when medicinal and culinary herbs would be harvested, dried, and stored for the winter. Tinctures would be made, herbal ales would be brewed, and medicinal lozenges, jellies, candies and spirits would be processed. It was a time to refill the medicine chest for the year.

Corn Moon (August)— It is the time of year when grain is ripening in the fields, readying for harvest. Throughout much of the United States the plant zea mays is being harvested and Americans are enjoying plenty of their beloved sweet corn.

Harvest Moon (September)–  The moon appears particularly bright and it rises early in the evening. This allowed farmers to keep working at their harvest into the night. (Source: The National Geographic Society)

Blood Moon (October)— The name comes from the fact that small farmsteads would slaughter meat for winter in the fall. It was the time of year when hogs would be fat , having benefited from harvest season and all the other richness of the farm’s agricultural year.

Snow Moon (November)— In 16th century England it was the time of year when villagers of the British Isles would expect to see their first snowfall of the winter.

Moon of Long Nights (December)— In this moon we will move through the winter solstice, the longest night of the year.

Wolf Moon (January)– This was a time of year when country folk and farmers could hear the hungry winter howls of wolves in the distance, and begin to feel the metaphorical wolf at the door of their farmhouses. Either the stores of food were still well-provisioned from the harvest, or they were beginning to run low.

Hunger Moon (February)– The late winter lunar cycle was called The Hunger Moon by many different peoples in many different languages, but always for the same reason. When you depend on the land where you live for food, and the land has been frozen for months, you are likely to be hungry.

Last fall I took a moonlit walk at Cary Institute of Ecosystem Studies in Millbrook, NY.  The night was chosen because it was the Harvest Moon. A group of us walked on the grounds of the Institute for a couple of hours without flashlights, learning owl calls and viewing the heavens through a small telescope. Thank you Cary Institute for organizing the Harvest Moon event, helping us make that connection to the cycle of the seasons that most of us have all but lost. 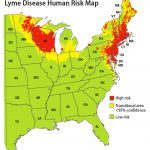 If you live in a light green area of this map, you probably don’t need to read further. However, if you live in (or visit) the yellow or red areas, read on.

The map came out of a study published in the February issue of the American Journal of Tropical Medicine and Hygiene. Highlights of the study are as follows:

-High risk areas are across much of the Northeast, from Maine to northern Virginia, as well as most of Wisconsin, northern Minnesota and a sliver of northern Illinois.

-About 1 in 5 ticks collected were infected, which was higher than expected and also did not vary much across geographic areas.

-In 2010 there were more than 30,000 confirmed or probable cases of Lyme Disease. More than 90% were in the states mentioned above.

As it turns out, where I live in the Hudson Valley region, they have issued a Lyme disease warning for this year. They are predicting it will be the worst year ever for the threat of Lyme Disease. Due to a bumper crop of acorns in 2010, which led to a larger population of mice, who are excellent hosts for the bacteria that spawns Lyme, there was a larger population of infected ticks lying dormant this past winter.  Fewer mice in 2012, due to a small crop of acorns last fall, will mean the infected ticks are looking for something to bite!

Richard Ostfield, a scientist at Cary Institute of Ecosystem Studies who has been helping to spread the word in our region, advises residents to roll up socks over pant legs, and spray pants, shoes and socks. It’s not enough to spray your pants and not your shoes and socks.

I would add, wear gloves when you garden.  Our new garden gloves with arm saver have elbow length cuffs with a stretch cord to tighten the top of the cuff.  It’s lightweight cotton, so it will keep ticks from crawling up your hand to your arm, and it protects against light scratches and sun—without being hot to wear.  In 2010 I was diagnosed with  Lyme disease and was treated with a course of antibiotics, but never had any symptoms. 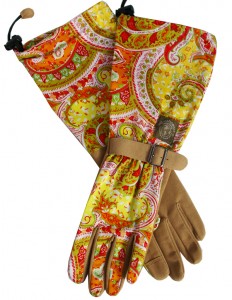