We’re at the Audubon Center in Sharon, Connecticut.  Lynn Martin pulls on a pair of Womanswork leather gloves and takes Mandy the red-tailed hawk on to her hand. Mandy lives at Audubon due to an eye injury that prevents her from living in the wild. Most of the birds there were found injured in the wild and were brought to be rehabilitated or protected if they couldn’t be released.

She talks softly to Mandy, getting to know her as she gets comfortable with having a hawk on her glove again.

Lynn is a licensed falconer and New York State wildlife rehabilitator who found the love of her animal life in a hawk she named Lady Z, who passed away a little over a year ago. She spent 12 years with Lady Z and grew to admire her strength, her infinite patience and even her sense of humor. Lady Z was Lynn’s teaching partner and an ambassador for her species.

Her relationship with Lady Z tells the story of Lynn’s belief in the potential for good when humans connect with animals.

“I wish humans could recognize the heart and soul of wildlife. The depth that I’ve experienced by connecting with wild beings is probably some of the deepest emotion I’ve ever experienced. I think animals have a lot to teach us and if I could wish for one thing, it’s that we humans start listening to them.”

She attributes her fascination with wildlife to her childhood in Wisconsin. “I always played in nature,’ says Lynn. She had a butterfly hospital and a wildlife cemetery. She used popsicle sticks to mark the graves. She made playhouses in the fields of tall grass and the spiders were her companions.

After a successful career in hospitality in Wyoming and California she moved to New York State to further her career. She decided she also wanted to become a licensed falconer and wildlife rehabilitator.  She says every state has a different process but in New York you take an exam administered by the DEC (Department of Environmental Conservation) demonstrating that you know how to handle and care for wild animals. You also have to show you know how to recognize diseases that may afflict them, and how to care for them and yourself.  For falconry you also have to have your equipment and housing inspected before you can get your license.  The work is all volunteer with no compensation. Both types of licenses need to be recertified each year by submitting license-specific paperwork.

Over the years Lynn has worked with raptors and other birds, rabbits, gophers, chipmunks, squirrels, turtles, snakes, birds, deer and many more. Animals such as raccoons and other vector species, which can contract rabies, are a separate specialty and require a different license, so when they come her way she passes them on to the proper licensed rehabilitator.

“Sometimes the animals can be saved and sometimes they can’t,” she says.

She talks in a moving way about one of the losses she encountered with a whitetail fawn that was injured in the wild by a black bear. “All losses are sad but some roll off easier than others. The ones that cut deep stay with you forever and make you cry like a baby, whether you were with them for an hour or a month. I believe we humans have to let our hearts break occasionally to continue loving deeply.  Rehabbers have some of the biggest hearts and deepest love of all because of this.” She adds, “RIP sweet baby. We tried.”

Lynn talks about what to do if you find a wild animal in distress. Call the DEC or search online for an animal rehabilitator in your area and then place a call. You may not get a call back right away, especially during baby season, but keep trying since there is a lot of demand and not enough rehabilitators for this kind of work.

In the meantime, put the animal someplace quiet and warm and dark. Put a box on top of a heating pad with a blanket or towel inside. Lots of well meaning people do the wrong things when they find an injured animal.  For instance, rabbits in the wild don’t eat carrots! In fact most wild rabbits don’t survive in captivity. They are built to die from fright because they are a prey animal.  And never try to force feed an animal water or food unless you are a qualified rehabilitator. It is often what causes their demise in the hands of someone inexperienced.

When Lynn talks to people who have found an injured animal she feels it’s important to let them know they did the right and compassionate thing. She wants to make the experience as positive as possible for them by letting them know the outcome, good or bad. Sometimes simply ending the suffering of an animal that cannot be saved is the best we can do.

Lynn tells the story of a neighbor who shot and killed a mama fox who had killed a couple of his free ranging hens. The fox had four babies in a den (kits) that were situated under a pile of cement blocks and rubble from an old foundation. They had to get an excavator in to move the cement and retrieve the babies or they would have died there. After getting them out Lynn brought the babies to a licensed rehabilitator who specializes in foxes and they were rehabilitated and ultimately released into the wild.

The story had another happy ending as well.  “It took a village to get the babies out of the den’, says Lynn. ‘but one of the people helping us was the person who shot the mother fox.” She feels that in the process of helping to save the babies he changed his perspective and realized the responsibility we all have to co-exist. 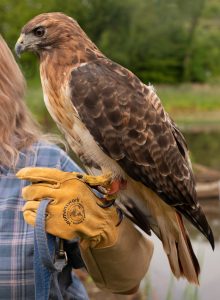 The Story of Lady Z

When Lynn and Lady Z found each other, Lady Z was near death from eating a rat that had consumed poison. Lynn helped her to recover but her injuries prevented her from returning to the wild ever again due to an enlarged heart and liver.

Lynn and Lady Z used to work with addicts and people who had dealt with severe trauma or with end of life illnesses. Addicts often suffer from shame and disappointment and they would hold Lady Z and sit in silence. “I witnessed with my own eyes and heart these people experiencing something amazing just by holding this magical creature and feeling connected to a being that is wild and not judgmental,’ says Lynn.

Through this and other experiences Lynn saw in Lady Z a being that understood and seemed to accept that she had a higher purpose in this world. Although she couldn’t be released due to injury she didn’t seem to be depressed. She would pose and be a ham for photos and be there for the people. She had palpable patience and a gaze that spoke only to love.

“I’ll know it when I find my next hawk,’ says Lynn. “A couple of birds have come my way that I knew were not right. I don’t want to keep an animal that could be free.”

Lynn brings her compassion for animals to her present job, even though her job description has nothing to do with animal health per se.

Almost four years ago Lynn was hired as Managing Director of Harlem Valley Homestead, a 250-acre diversified farm in Dutchess County, NY.  When the project is completed visitors will stay in cabins on the property, learning to connect to the land, their food and to each other. There are plans for a land based culinary program, educational programs, workshops, and much more.

At Harlem Valley Homestead employees understand the importance of accommodating both the native wildlife and their goals as a working farm.  They don’t use anything that will hurt raptors or wildlife, such as rat poison.  During the time of year when turtles are marching towards the river, they will turn off the electric fence and check frequently to be sure the turtles are not getting caught in the fencing. When the kildaires build their nests in the fields it’s not uncommon for the farm crew to mow around the nests until the babies have hatched and left the nest.

Like many farms, a staff shortage at Harlem Valley this past year saw Lynn assisting with some difficult births of calves. She had delivered foals when she worked on a ranch in Wyoming years earlier. These experiences have deepened her connection with place, and the food she eats.

When it comes time to harvest the animals for food, knowing they were treated with kindness and care creates deeper honor for the animal, Lynn believes.  At Harlem Valley the livestock manager often sends an email to the staff before an animal is going to get processed to let them know they can go and offer gratitude and say good bye.

There are also occasional wildlife emergencies that the staff assist Lynn with, be it baby birds or other injured species. “Everyone here cares deeply for the animals and for the land.”

Since she’s been at Harlem Valley Homestead she’s learned to be a gardener like she never was before. “It’s a great place to bounce off ideas and ask questions. It has been such a privilege,’ says Lynn. She eats as much as she can of her harvest, and shares the rest with neighbors and friends. “It gives me as much joy as eating it myself,’ she adds.

Tips from Lynn on becoming an animal rehabilitator:

What to do if you find an injured animal near you:

Photos of Lynn and Mandy were taken on location at the Sharon Audubon Center by photographer Sun Hing.