I have three favorite bulbs that I like to grow in the summer. In my Zone 6 garden they have to be planted in the spring after the last frost. That’s what I’m doing now. There are many other summer blooming bulbs as well, but these are my personal favorites, currently.

The term ‘bulb’ applies to a large class of flowering and ornamental bulbouslike plants in their dormant condition, including corms, tubers, rhizomes and pips.

Acidanthera (Abyssinian Gladiolus)— I ordered a few bags of 25 bulbs each from a large bulb company this spring. Because this bulb is tender in my zone 6 garden, I plan to store them indoors next winter. So I decided to plant them in a container which will make it easier to retrieve and store the bulbs at the end of the season.  After placing 25 bulbs in my container, about 4″ down from the rim, I buried them under 3″ of soil and watered them.  I did something extra afterwards that I hope will be a nice aesthetic touch. I put a layer of grass seed on the top of the soil and sieved on a thin layer of dry soil to bury the grass seed a little before watering. I’m hoping grass will grow around the feet of the acidanthera. (This is not my idea. I saw it done with Amaryllis Bulbs at the Little Garden Club of Rye winter meeting a couple of years ago. It looked great!).

The photo here was taken at a flower show. My friend Kathy Scherer entered and won First Place for her acidanthera stems. In the photo they are the long stems with white flowers and mahogany center. Kathy grows acidanthera in containers every summer, and loves their ‘wonderful fresh, clean scent.’ She staggers the planting of them so she has something blooming over a few months. It takes approximately 6 to 8 weeks from planting to bloom time, she says, and she plants them about 2″ under the soil in her containers.  I’m going to follow her advice about staggering the bloom times and hold back some of my bulbs (or corms) for later.

Canna Lily— The first time I owned a canna lily I brought it home already blooming and transferred it to a planter on my deck. It lasted most of the summer and was quite lovely with its bright orange flower spikes.  At the end of the season I removed the bulbs from the planter, cut off any shoots and roots, and stored them in a cardboard box with peat moss and shredded newspaper in the basement.  In early spring I brought them upstairs and broke apart the bulbs. I started with just one plant and ended up with 2 or 3 plants the 2nd year, and 7 plants the next year, which is this year.

Early this spring I planted each one in a small container and kept them indoors so they would get a head start on spring. By the time I repotted them and put them outdoors last week they were already growing 12-16″ above the soil line!  If you don’t start them in containers ahead of time you have to wait until the threat of frost has passed before putting them outdoors.

In Marianne Willburn’s book Tropical Plants and How To Love Them, she puts canna lilies in the “Best Friend” category. She defines ‘best friends” as plants that go fully dormant in a frost-free basement or garage. They don’t need extra pampering! (Marianne is featured in the Womanswork catalog this year. Read more about Marianne’s garden and her book by clicking here.)

Agapanthus— If you like the color blue as I do, and you have a sunny area, try growing agapanthus.  I have a container planted with agapanthus that has grown rootbound, which they like.  I overwinter the plant in the container in my basement since they won’t survive winters in my zone 6 climate.  I put my container outdoors last week after the threat of frost was over.  In addition I just purchased some bare root plants of a small, more compact variety, and have potted them up and put them outside too. The plant arrived as a bare root plant with tiny bulblets, so not a classic bulb.  This plant is sometimes referred to as African lily or lily of the Nile. 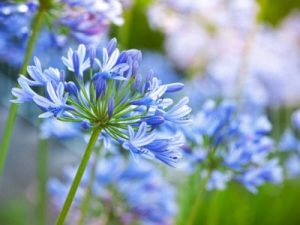 One thought on “My Favorite Summer Blooming Bulbs To Plant in Spring: Acidanthera, Canna Lily and Agapanthus”