Like many gardeners Marianne Willburn started small. First she had window boxes and containers, then she moved to a tiny duplex where she managed to squeeze in a small vegetable garden next to the parking area. As she and her young family moved to larger properties, hopscotching from California to London to Maryland and finally Virginia, the space given over to gardens kept getting bigger.

But that’s where the similarity to other gardeners ends, because Marianne’s ambitions just kept growing, well beyond the average gardener’s dreams. The self-described Type A (make that ‘Triple A’ in her words) personality eventually gave into a budding love of tropical and subtropical plants and she began building a tropically-accented garden in her non-tropical, Zone 7 garden in Virginia. Twelve foot banana plants are just one of the many scene stealers there.

After 10 years of tropical trial and error, amassing a wealth of practical as well as academic knowledge, Marianne wrote a book called Tropical Plants and How To Love Them, published by Cool Springs Press in 2021.  The book was recently shortlisted for the British Garden Media Guild’s Peter Seabrook Award for Best Practical Book of the Year. Quite an achievement, especially for an American author. 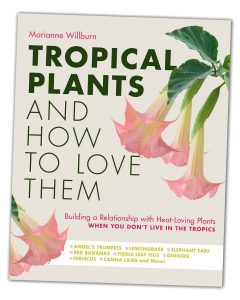 Most books on tropical plants that are available today were written 15-20 years ago and the material is presented from a highly specialized perspective, according to Marianne, not necessarily for the average gardener. “Those excellent books, written by such tropical pioneers as Will Giles, Susan Roth and Dennis Schrader make up a great deal of my reference library and are incredibly valuable to gardeners wishing to delve deeply,” she says, but acknowledges that some people don’t want that much detail. Some of the oldest reference books are in black and white, which doesn’t bother Marianne, but most of us are accustomed to seeing images in color. Her book is full of them.

Marianne describes her book as one that makes the idea of using tropical and subtropical plants more accessible to temperate gardeners who are tempted to work with these gorgeous plants to create something unusual in their gardens.

Marianne grew up in the north central California foothills, and moved as a young adult to Southern California, where tropical plants were more commonplace.  But, as she says, sometimes they looked a little worse for wear at the nurseries and she was not drawn to grow them in any of her gardens. After moving East, where tropical plants are considered more exotic, she started seeing them used as accent pieces in gardens and this slowly pulled her in. She began attending tropical plant conferences. As she became more knowledgeable she began to fall in love.

Carrying on a relationship with tropical plants becomes a metaphor and the organizing principle in Marianne’s new book. There are plants you just want to have a summer romance with (Sexy, Exciting, Fleeting) and those you commit to for the long-term (Strong, Gorgeous, Versatile), and there are others in between. She wants the reader to become as besotted as she is.  It’s fun and playful and it seems consistent with this showy, lush and sometimes fickle category of plants.

I looked up Canna Lilies in her book, because that’s a plant I’ve started to grow and overwinter myself in my Zone 6 northern garden. She classifies Cannas in the category of “Best Friend” defined as “Tropical plants that don’t need a greenhouse, living room, or pampering to overwinter in a dormant state.” She goes into detail about how and when to store them for the winter and how to ‘wake them up’ in the spring. It’s full of great information and photos.

Enter our giveaway of Marianne’s book by leaving a comment below or by visiting us on Instagram or Facebook. Also check out Marianne’s first book, Big Dreams, Small Garden, which she wrote to encourage other gardeners not to wait for their ideal home and property to begin their gardening life. It was published in 2017.

49 thoughts on “Marianne Willburn: Growing and Caring for Tropical Plants”