One of Yolanda Burrell’s happiest childhood memories is of climbing the peach tree in her maternal grandmother’s garden in Los Angeles to pick peaches that were the size of tennis balls, as she remembers them.

Early memories like these have informed the way she views the landscape today. “Everything we grow in this climate has to do double duty,” she says. “Water is scarce so I feel that it should be used to grow food rather than ornamentals exclusively.”

When Yolanda first moved to the city of Oakland, CA she connected with a group of like-minded people who shared her dream of creating edible landscapes in the city. From the age of 15 she had been learning the ways of sustainable, waterwise gardening from her parents who were urban homesteaders in northern California before that was a trendy thing to be. Although at the time her chores seemed like, well, chores, the skills she learned stayed with her. Later she worked in book publishing and teaching, always finding a way to garden wherever she lived, even if it was only an herb garden on the kitchen windowsill.

In Oakland, she found a community and she started swapping skills with others. But the problem was finding the tools and supplies they needed. “We needed a hardware store, a kitchen shop, a garden center and a place to cultivate community, all in one place, under one roof,” says Yolanda.

The problem solver in Yolanda saw a need and decided to become part of the solution. She and a partner who has since left the business opened Pollinate Farm & Garden Supply in 2012 and it has tried to live up to all of those demands ever since.

On the street side of the shop Yolanda built raised beds where she grows seasonal veggies, herbs and pollinator plants, and every Sunday afternoon they host a Crop Swap. Neighbors bring their homegrown produce to swap, but if they don’t have their own they’re encouraged to take what they want. Food security in her community is real, and no one is turned away for lack of a trade.

Inside the shop she sells things like chicken feed (two organic kinds, two conventional, in a range of prices), books and garden supplies. She holds workshops about chicken- and beekeeping, seed starting, composting, grafting fruit trees, as well as workshops on preserving the seasonal bounty.

Behind the shop is an orchard where she keeps chickens, ducks and bees and incorporates them into her workshops. There’s also a demonstration and teaching garden where she grows sunflowers, perennial edibles, culinary and medicinal herbs, annual veggies, and where she experiments with crops such as hops. She follows permaculture practices, which she defines as “gardening with ecology in mind,” and there’s a workshop for that called “Permaculture Lab.”

The Fruitvale District
Yolanda describes the Fruitvale neighborhood where her store is located as racially and economically diverse. “We have some gentrification, with college graduates moving in from other cities or other parts of California, and we also have people who’ve lived in their homes for 50 years,” she says.
The area has an agricultural heritage. Even before it was part of the State of California Fruitvale was part of a hacienda and some people have fruit trees in their backyards that have been there for a long time. They come in to Yolanda’s shop with questions and want to learn more about their trees. 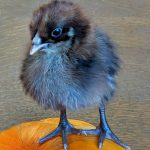 Keeping Chickens in an Urban Setting
There are also a lot of chickens in the neighborhood and Yolanda’s chicken keeping workshop is popular. She calls chickens ‘pets with benefits’ and dispenses hands on wisdom. She advises people to get chicks rather than pullets (young hens). “If you have young children it’s good for them to learn to handle the chicks,” she says. When you get them young there’s less infighting among the flock too. She helps her customers think through what breed they want based on factors such as friendliness, laying prowess, looks (she calls the pretty ones ‘super models’). She suggests they avoid white hens because they are a target for flying predators such as hawks, and she recommends shrubs be planted to provide some protection for free-ranging hens as well. When deciding how many chicks to get she suggests they start by deciding how many eggs they want to consume. Then, she cautions, add one more chick in case one dies or is taken by a predator. That way, you need not worry about integrating a newcomer into an established flock.

Yolanda is wearing Womanswork High Performance gloves and holding her hen Hermione.  These gloves will be available at Pollinate Farm & Garden Supply soon! 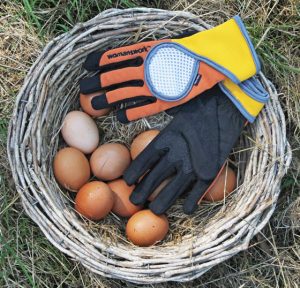 Photos of Yolanda were taken by Zack Dinh in the garden behind the store. Dorian spoke with Yolanda on the phone in the writing of this story.