It almost seems as if everything in Heidi’s life has led her to this enchanting place – a home on Narragansett Bay in Rhode Island where she and her husband David Sommers enjoy sailing and gardening. Heidi grew up in Rye, NY, the daughter of a talented gardening mother, Helen Hild, who enrolled her at age 8 in a children’s gardening program at the NY Botanical Garden in the Bronx. She even received a special commendation from NYBG upon graduation and was featured in a NY Times article! 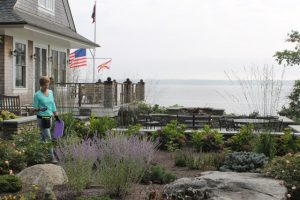 When she and her husband bought their bayfront property they wanted gardens. Since they were both working full time Heidi asked her sister Heather Hild Atwater, trained in Landscape Architecture, for help. Heather planned three garden beds, now mature, along a border of the property that sweeps down to the water. She called her design ‘Three Islands’, an homage to islands in Narragansett Bay, and shaped each bed to represent an island.

After retiring from IBM Finance, Heidi and David decided the existing house was not going to meet their needs, and they undertook to build a new house– completed in 2017.  Since then, over the course of 3 seasons, the couple has proven their gardening mettle, taking on one ambitious project after another. The ‘Three Islands’ garden was left mostly intact during building and Heidi has added a woodland garden, filling in the shady area along the winding drive from the house back to the main road, as well as a vibrant young garden next to the house which catches all the wind, sun and sea air that is part and parcel of its location.  Several rain gardens were put in, as well as a large vegetable garden, which David tends to.

Building Rain Gardens
Where Heidi and David live, the purpose of a rain garden is to prevent storm water–and substances carried with it — from draining down the slope of their property into the sea. This is a requirement on Narragansett Bay.
A series of culverts was built underground that drain into large depressions dug out of the grade, forming a basin to hold the water. First, Heidi lined the bottom of her rain gardens with fieldstone found on the property in order to prevent erosion. Then she planted moisture loving native plants to help soak in and absorb the water. Here are some of the plants Heidi has planted in her rain gardens:
• Lobelia cardinalis (Cardinal Flower)
• Clethra (‘Hummingbird’ and ‘Ruby Spice’ cultivars)
• Salix integra (Willow)
• Astilbe (planted along the edges)
• Siberian Iris
• Winterberry 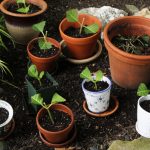 Propagating Hydrangeas
Hydrangeas thrive in sea air and Heidi has a profusion of billowy blue, pink and white Macrophylla or mophead varieties throughout the property. I was impressed when I came across a collection of hydrangea cuttings in small containers clustered in a shady area near the garden shed, and discovered that Heidi is a propagator. She pointed to some mature hydrangea bushes that she had propagated from scratch. Here’s how she does it:
Step 1: Prepare a few 4-inch or larger pots with potting soil and use a pencil to create a 4-inch deep hole to accept the cutting.
Step 2: Cut a full stem or two from your favorite hydrangea – look for a “young stem” which is mostly green/not too woody.
Step 3: Cut the stem into sections with two sets of leaves in each section, leaving about an inch above and below each set of leaves.
Step 4: Remove and discard the bottom set of leaves and dip the stem in Rootone, or other rooting hormone to cover the bottom of the stem just past the lower leaf buds that you removed. Place stem with Rootone into the pencil hole in the pot, keep moist.
Step 5: Cut the top set of leaves to reduce their size by ~75% to allow the plants to become established. They can remain in the pots for ~ 2 months and then can be transplanted. It will take roughly 3 seasons for the hydrangea to reach its full potential.

Author’s Note: Heidi and Dorian met in college (Smith College) and have remained good friends ever since. We visited Heidi and David this summer and saw their new house and gardens for the first time.

One thought on “Roots By The Sea”