Five stories up, a rooftop garden is a retreat from the lively streets of London below.

The L-shaped garden, full of fragrant plants and cozy seating, wraps around the top floor of the triplex apartment which writer and garden historian Catherine Horwood shares with her husband Paddy Barwise. 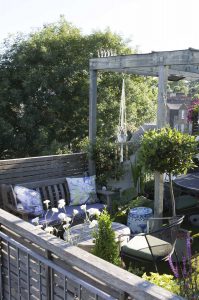 When the garden was created they installed wood trellises, a pergola and side rails with built-in plant troughs. The garden faces due south so the hardscaping structures provide a break from the elements. “I had a seaside garden once, and it was similar to this,” says Catherine, citing the abundance of wind and sun as common to both.

For years Catherine divided her time between London and a country house in Suffolk where she created a garden on 1/3 of an acre. They sold the country residence about a year ago and Catherine has turned her attention back to her terrace garden in London.

“There were things I couldn’t part with when we left the country,” says Catherine. So she planted sweet peas, purple-podded French beans and runner beans and strawberries in pots on the terrace and, in general, tried to capture some of the sensory pleasures of her country garden.

Scent is one of the most important requirements to Catherine when choosing plants. She selects varieties that have fragrance because “why have ones that don’t give you that extra bonus?” she asks.  This includes Dianthus ‘Memories’, with a strong clove perfume fragrance that she calls ‘delicious’, Lilies, Sweet Peas, Roses (only the scented ones), Lemon Verbena, Star Jasmine, and sweetly fragrant purple petunias. She grows new varieties of scented Clematis that are especially bred for containers.

On Catherine’s terrace there is an olive tree and a small, 15 year old magnolia tree. Succulents hang in pots dangling from macrame pot holders during the warmer months, moving inside during the winter months to protect them from wet London winters.

Growing in Containers Year Round

Catherine rotates her containers throughout the growing season, which is year round in London. As one plant dies back she moves the container to an area out of sight and moves in the next one. So from December to May she can display a succession of spring blooming bulbs from snowdrops, crocus, narcissi and tulips to anemones, muscari, cyclamen, scillas, iris and fritillaries, choosing varieties that are suitable for her micro climate. Then in the summer months she moves on to lilies, citrus plants and acidantheras. Later it’s dahlias, which she overwinters in a small plastic covered greenhouse called a ‘Culticave’. It protects her tubers and some of her succulents from excessive winter wetness. Winter temperatures rarely dip below freezing in central London.

Catherine credits her passion for gardening to her mother and her sister. Her mother died 16 years ago and Catherine says “I still miss being able to show her my triumphs and discuss disasters.” She has three daughters and one of them has ‘green fingers’ (which is the equivalent of our expression ‘green thumb’). She and her daughter share pictures of what’s looking good in their gardens almost daily, so “maybe it’s in the blood after all,” says Catherine.

Catherine’s current writing project is the official biography of British gardening doyenne Beth Chatto who died early in 2018. Several years ago she was asked by the Director of the Garden Museum in London to help organize Chatto’s archives, including her private diaries, which were bequeathed to the Museum.  Catherine got to know Chatto over the final years of her life, regularly spending one day a week with her in her garden. Chatto’s family asked her to write the official biography, which will be published in the fall of 2019 by Pimpernel Press in the UK, as well as in the US and Germany (publishers to be announced).

Photos for this story were taken by Sarah Cuttle in the UK.