Which Plants Want A Winter Rest?

Many plants native to warm climates can be grown in colder zones as perennials, but require a rest period during cooler months, which encourages them to bloom or fruit again. Dormancy in plants occurs when the environmental conditions are not suitable for the plant to grow; this is most often during a cold or dry season. 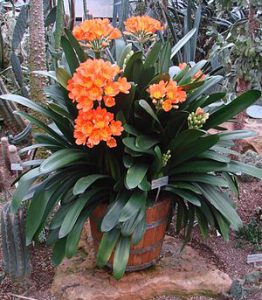 Here are a few popular plants I have in my garden, and the techniques Northern gardeners can use to overwinter them:

Clivias are native to shady, subtropical woodland areas of Eastern South Africa. In the wild, they go dormant during the dry part of the year. This rest time promotes the development of new buds.

In temperate regions, you can promote flowering of clivias by creating a dormant period: put the Clivia in an environment with a temperature of 50 degrees for 6 to 8 weeks, with very little light (a basement or garage), and just enough water to keep the soil slightly moist.

After the end of the dormant period, the stem will lengthen and a bud will develop. When new growth begins, move to a place with 65-75 degree temperatures and bright, indirect light.

Click here to visit The North American Clivia Society’s website, which has a wealth of information and links about clivias. 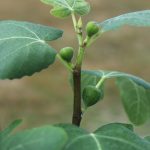 The fig is believed to be indigenous to western Asia. It is in the mulberry family. In Mediterranean and Middle Eastern climates, figs may have two or even three fruiting seasons, but have rest periods in between.

Figs are sometimes wrapped to withstand cold winters outdoors, but potted figs can be overwintered in a garage or cool basement. Allow the fig to go dormant by reducing water. The plant should stay outdoors through a light frost, to encourage the sap to move down toward the roots. Move it to a dark location that stays just above freezing. If your location is light, wrap the plant in dark fabric to keep it dormant. About two weeks before the last frost, the plant can be moved back outside. Choose a protected area, such as near a wall, until temperatures warm up.

Lee Reich is a fruit growing expert with lots of practical information about growing figs in colder climates: http://www.leereich.com/2014/11/figs-up-north.html

Lily of the Nile –Agapanthus africanus 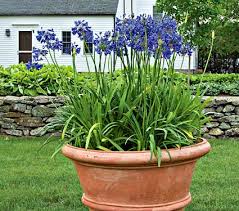 Agapanthus, also known as Lily-of-the-Nile, or African Blue Lily, is a showy blue or white flowering perennial, native to South Africa, where it grows in the shade, under trees. They have a dormant period during the winter months.

To overwinter agapanthus indoors, move pots indoors after a light frost. Cut back the foliage. Keep them in a cool, dark location, with temperatures between 35 and 45 degrees Farenheit. In late winter or very early spring, bring the dormant corms into a warm area and water thoroughly. In a few weeks, new growth will emerge. They can be placed back outdoors after danger of frost is over.

Amaryllis, a relative of agapanthus, can be treated in a similar fashion, though it doesn’t require very cold temperatures for the dormancy period. Bring amaryllis inside before the first heavy frost, cut back foliage to the top of the bulb, and keep in a dark, cool location (50-55 degrees Farenheit) for 8-10 weeks. When new growth emerges, water and move to a bright location, with temperatures between 65 and 75 degrees.

Other Plants That Like a Dormant or Rest Period:

One thought on “Which Plants Want A Winter Rest?”