In the agriculture-based culture of the Oneida Nation, to which Toni House and her family belong, plants are sometimes referred to as younger sisters and older sisters. Humans and plants are often considered equals.

“We learn to listen to the earth rather than try so hard to change it to fit our ways,” says her daughter Jasmine Jimerson. In this ecosystem, humans try to replicate what they observe in the natural world, and then make small adjustments.  It’s a system where human intervention is minimal because the plants help one another, forming a plant community. These days, the word permaculture is used to describe this method of growing, but it’s essentially an indigenous philosophy and Jasmine is dedicated to learning more about it from practitioners inside and outside of her community. 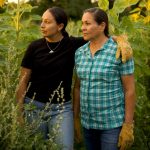 This summer she received a scholarship from earth advocate Rob Greenfield. She spent two weeks in Asheville, North Carolina learning more about permaculture.

Jasmine is the third generation in a line of strong women who are passionate about sustaining their native culture. Jasmine’s grandmother was an activist in the 1960’s and 70’s who advocated for Indian rights and helped establish identity and a sense of pride among her people. She and two others started an Indian community school where they lived in Milwaukee, Wisconsin.

Her grandmother paved the way for her mother’s generation to take on the work of learning the customs and ceremonies of their people and passing the teachings on to their children. Toni raised her family in the ways of the Oneida Nation and lived on a reservation in Wisconsin. Even there the nation school did not provide a language immersion program so she ended up home schooling her children.

One of her first science lessons was about the Three Sisters. Although she was not a gardener, having grown up in a city, she knew about the Three Sisters from the Creation Story, and she and her family planted a garden as a learning tool. The Three Sisters consists of three crops that form a co-dependent plant community. Corn grows tall and strong, providing sustenance to the people. It serves as a pole for beans which add nitrogen to the soil as they grow. Squash is planted at the base of the corn. Its broad leaves and prickly stems keep weeds at bay and prevent foraging animals from taking more than their fair share. 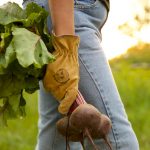 Jasmine’s generation has the exciting challenge and privilege of reviving their language, something that wasn’t available to her mother’s and grandmother’s generations. As she says, “We can’t separate growing our food from learning the language.”

She is a teacher and her children are students at an immersion school called Akwesasne Freedom School, on the New York border of Canada. The school is run by the Mohawk Nation, which like the Oneida Nation is commonly known as the Iroquois Confederacy or Haudenosaunee (“They Build A House”) and shares a language similar to theirs. The school is non-profit and gets its funding through foundations and private donations. Jasmine speaks the Mohawk language fairly fluently and Jasmine’s children, ages 7 and 10, are fluent. Toni can understand a little, but cannot speak.

Instead of practicing different things in different places, as she does now, Jasmine has a longer term dream to form an eco village where people live and work together in much the same way her ancestors did. Like plant communities in permaculture, Jasmine believes that communities of people working together is a better way to grow, and helps avoid some of the waste that comes from individuals tending their own gardens. To this end she is working with a group of women and a few men to build their skills around seed saving, growing, permaculture and sustainable living. They are steeping themselves in the language, culture and history. They are hoping to eventually put down roots in their traditional homeland where lands of the Oneida and Mohawk Nations meet. Many of her group are affiliated with Akwesasne Freedom School, whose motto is “The Freedom to think and walk in two worlds.” 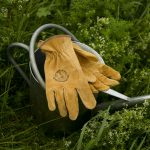 For now, Jasmine grows medicinal herbs and some vegetables and sunflowers (a sacred flower that goes back to the Iroquois Creation Story) in her garden in Upstate New York, and continues her learning and teaching.

“When I wanted to learn about medicine,” says Jasmine, “my mother said to wait until medicine comes to me. It’s about waiting for the plants to come to you, and having a relationship with them.” It’s a slower, more intentional way of learning.