I bought a potted Easter Lily for the small family gathering we had this year, and we received some potted daffodils from my brother and sister-in-law as a gift. Most often these bulbs are thrown on the compost heap or trash bin as soon as they’ve finished blooming, but I decided I wanted to keep mine.

I asked horticulturist Ruth Clausen for her suggestions about saving these bulbs for future years. I was hoping she would tell me I can store my bulbs and force them to bloom indoors next Easter.  Here’s what she had to say:

Lilies, daffodils and tulips grown in pots for the Easter market are all timed to hit the market a couple of weeks before Easter. Having been forced to bloom under stress, they are not good candidates for reblooming next Easter indoors.

However they can be planted out in the garden where they will continue to produce blooms for years– on their own timetable.  This advice is for USDA Hardiness Zones 5-8, which covers all but the hottest and coldest parts of the country.

Lilies: Lilium longifolium. After bloom time keep them in a cool place with good light. Water as usual. Keep the foliage intact. A couple of weeks after the last frost in your area, plant them outdoors at the same soil level as they were in the pot, in a part sun area in average soil. Fertilize gently. Keep weeded and watered just as you would for any other perennial planting. Mulch in winter.  Lilies naturally bloom in the summer, but having been forced to bloom this spring they will not bloom again this summer. They will bloom next summer.

Daffodils can be planted outdoors as soon as it’s convenient. If there are several in a pot, they can be split up so that the bulbs are  a few inches apart from each other. Plant the same depth as they were in the pot. They will probably bloom the first year after forcing, although not as robustly as before. In subsequent years the bloom should be good every year. 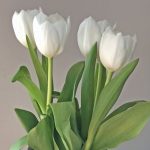 Tulips are less likely to rebloom the following year but will produce foliage. Fertilize gently in spring, with foliage intact. In a few years they may rebloom. In the intervening years the foliage will produce food that goes into the bulbs for the next season.

Never remove the foliage on your bulbs after bloom time. It must ripen naturally as it sends food to the bulb for next year’s bloom.

One thought on “Saving Easter Lilies and Other Spring Holiday Bulbs– Will They Rebloom?”