Growing up in Colorado Chelsea Willis’ mother would tell her “get your hands in the dirt. It grounds you.”  Chelsea recognized the wisdom of these words at a young age, and never forgot them.

After completing a degree in somatic psychology, a discipline that focuses on processing trauma through movement (body-based therapy rather than talk therapy), Chelsea moved to Oregon and began working with teens who had been incarcerated and were transitioning to semi-independent living.

She was also doing some farming on land she leased outside of Portland and sometimes she would bring the young people she worked with out to the farm.  She envisioned a program where they would learn to work the land as an avenue towards healing.

Though she loved working with the teens, it was burnout work, and after three years she needed to take a break from it.

About a year ago Chelsea bought a one acre parcel of farmland on Sauvie Island in Oregon and became a fulltime flower farmer. “I always loved flowers,” she says. She named her farm Sweet Delilah Farm after a Florence and the Machine song called Delilah.  Through social media she found a farm manager, Theresa Bear, and also brought on an intern, Jen, as well as some volunteers, all of whom contribute to making the small enterprise float.

The local climate permits her to work 11 months out of the year. She starts her seed trays in January and begins planting out in March. A succession of flowers begins blooming in mid-April and the operation keeps going until around mid-November. December is her month off.

Her farm overlooks acres of farmland and 4 mountain peaks. She marvels that her view will never change because the land on this special island, connected to the mainland by a bridge and only 10 miles from Portland, is protected. More than half of the acreage on the 32-mile long island is a nature preserve. The other half is farmland and a few homes, but permits for commercial retail space are not given out.

Even though Chelsea grew up in a gardening family – her grandfather was an ‘incredible gardener’ who celebrated his 95th birthday planting potato starts with the help of Chelsea and her mother — Chelsea never planted anything from seed prior to coming to Oregon.  She took a workshop on small scale flower farming at Erin Benzakein’s Floret Flower Farm in Vernon, Washington, before those workshops went online only, and has applied some important lessons from that. But most of her knowledge comes from watching her plants and observing what makes them happy. It’s all about experimentation and trial and error.

Her farm had been a U-Pick your own lavender farm for 10 years before she bought the land. “People still drive up asking if they can pick lavender,” says Chelsea.  She does grow lavender, but she also grows roses, foxgloves, phlox, amaranth, dahlias and medicinal herbs.

Chelsea has a particular interest in partnering with small BIPOC-owned companies. She grows herbs for a handful of these customers who use them in skin care products made in small batches.  She grows buckwheat, marigold, calendula and amaranths to sell as dyeing bundles. This winter she plans to dye raw natural cotton for bandannas to wear as masks, because they’re healthier.  She might even venture into napkins and other tabletop products too.

The week we scheduled our Womanswork photo shoot at Sweet Delilah Farm there was smoke in the air from wildfires.  After a rainfall the air cleared and the early fall weather turned ‘gorgeous’ again, in Chelsea’s words.  We waited to get our shots until then, but it reminded us of the fragility of our ecosystem even in the paradise that is Sauvie Island and Sweet Delilah Farm. 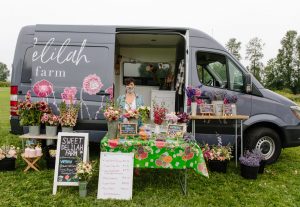 We asked Chelsea what she loves about her Womanswork nitrile weeder gloves, shown in the photos. She said she likes that they’re comfortable and lightweight. “I can do my work without constantly taking my gloves off,’ she says.  ‘And the fingertips don’t break through,’ she added.  She also likes the goatskin leather gloves for working with roses and found them to be a much better fit than what she has worn in the past.

As a fulltime farmer with an 11 month growing season, Chelsea is getting her hands in the dirt and more! 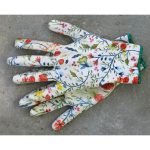 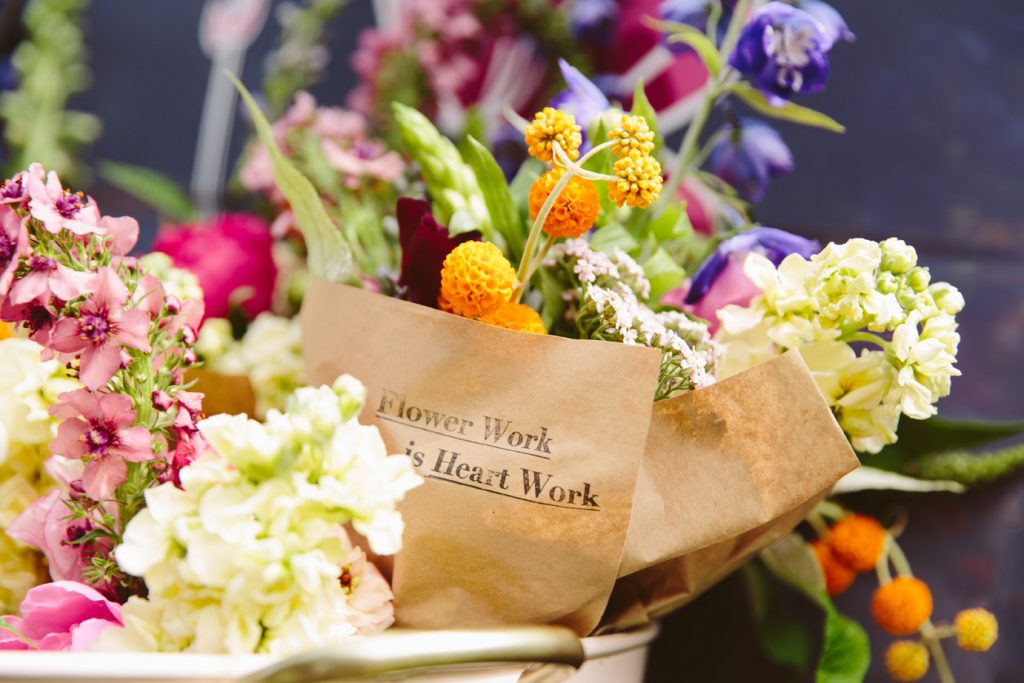