Bearded iris (Iris x germanica) is the most commonly grown iris. Its fleshy roots are called rhizomes. The flowers are distinguished by a caterpillar-like fuzzy “beard” that runs down the center of each cascading petal or ‘fall’. The “beard” aids in pollination, providing a landing spot for bumble bees and other insects, and supposedly directing them towards the pollen.

Iris rhizomes should be divided every 3 or 4 years to maximize vigor and bloom.

Two years ago my irises bloomed nicely as shown in the photo here. Last spring and this spring, however, they had very few flowers so I decided to divide them this year. 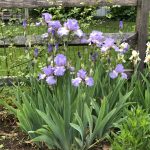 After digging into the bed I discovered there could have been another reason that caused lack of blooms this year. I may have covered the rhizomes with too much mulch, or voles or chipmunks ate some of the rhizomes; I saw some questionable evidence of the latter. Nevertheless, I went ahead and did some dividing.

The best time to divide is about a month or so after they bloom. The plant still has foliage, but it allows enough time prior to the first frost to permit the rhizomes to ripen in the sun. This is a critical part of the process to give your irises a head start after the last frost in early spring.

Use a fork to gently lift a clump of irises with their rhizomes from the soil.

Divide rhizomes by breaking them apart or cutting them with a knife. I’ve even heard of dropping them on the ground to see where they break naturally.  Be sure each remaining section has a group or fan of leaves on it. Discard any soft, rotted rhizomes. 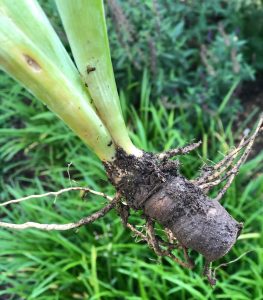 Cut the swordlike leaves back to about 12 inches tall. Ruth Clausen says that in less sunny climates, such as in England, the leaves are cut back to about 6 inches to give the rhizomes greater sun exposure to ripen.

Replant each fan, setting the rhizomes horizontally only halfway into the soil, leaving the tops exposed. (See image taken in my garden). 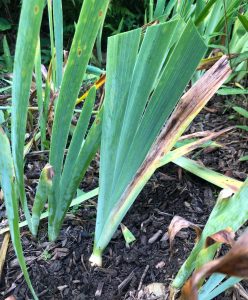 Bearded irises need plenty of air to circulate between the plants. Ruth Clausen suggests improving air circulation by removing dead leaves from the base during fall clean up.

5 thoughts on “How To Divide Irises”