One of the most satisfying parts of gardening for me is to take part in the miracle of plant propagation. It can be as simple as pinching off a stem and dropping it in a glass of water or as complicated as grafting a branch from one plant onto the root stock of another. Boom!  A plant is born. 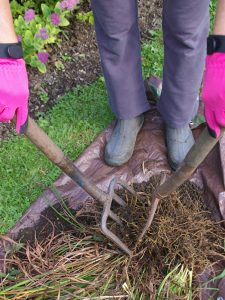 There are two primary ways plants procreate: sexually and asexually. Sexual propagation is through seeds, and it is the primary way plants multiply in nature.  Asexual propagation methods are manmade. Think of them as cloning — growing a new plant from a piece of the original plant.  Here are the methods most often used by home gardeners to reproduce plants.

Seed—Every seed is the genetic offspring of the parents — or parent, since some plants are self-pollinating. In a climate with a short growing season it makes sense to start seeds indoors before the ground is warm enough to plant them outdoors.  For a warm weather crop such as tomatoes, for instance, you can permanently stunt their growth by putting them in the ground when the soil and air temperatures are not warm enough.

The method I learned for starting seeds indoors was from a plant propagation course I took at The NY Botanical Garden. Buy a bag of soilless seed starting mix and put it in a bowl. Add hot water and work it into the mix until it’s moistened. Press the mix into any flat container. I use reusable plastic containers with lids. Put your seeds on top of the pressed soil, then screen more mix (unmoistened) on top of the seeds until the seeds are at the recommended depth. Put a lid or plastic wrap over the container and put it somewhere out of the sun. Placing it on the top of the refrigerator or on a heating pad can aid germination.  Watch your seeds carefully so that once they germinate you transfer them to trays with cells. Use a pen or the other end of a spoon to make a hole in each cell and push the stem of the seedling gently into the hole. Tamp down gently. Seedlings should have light but not harsh, direct sunlight, at this point. Most seed packs will specify how warm the soil and air need to be before transferring them outdoors.

Cuttings – Reproduce your favorite plant from the cutting of a stem or leaf.  For a stem cutting, cut straight across under a node. Dip in a rooting hormone, which can be purchased in small jars as a powder or can be made naturally with your own willow branch. If you have willow in your yard put a few stems in water for 24 hours. Then put your cutting in the same water for 24 hours.  Mix perlite and peat moss together, wet it with cold water and push your cutting into the mix. Cover it with plastic and leave it out of the direct sun as it grows roots. Don’t fertilize the cutting until you see signs of new growth, indicating roots are growing.  If your cutting begins to flower, remove the flower. Your cutting cannot grow roots and blossom at the same time!  Leaving a stem in water to root may create brittle roots, but I have found it works well with some plants especially if you are planting them in a porous potting soil afterwards.

Early spring is a good time to take cuttings of houseplants and coleus. Later in the season try cuttings from some of your favorite shrubs after they bloom. I have not had a lot of luck propagating cuttings from woody plants, but I will keep trying.

Leaf cuttings work well with succulents.  Push a leaf right into sandy soil and watch (patiently) as it begins to put out new growth.

Division – For clump forming perennials one of the easiest ways to increase the number of plants you have is to divide them. Dig around the roots and lift the entire plant out of the ground if you can. Lay the plant on a tarp on its side. Grab two pitchforks and put them together so their tines are intertwined. Push them into the side of the root ball (not down through the crown) and then stand in the middle and slowly push the two forks away from each other while teasing the roots apart. Now you have two plants where you had only one. Replant quickly before the roots dry out.

Right now is a perfect time to divide perennials that bloom later in the season such as daylilies, daisies, joe pye weed or coreopsis. For early spring blooming perennials, divide after they bloom so they have the whole season to recover for next spring.

For plants with rhizomes such as bearded iris, divide mid summer but no later than mid August. Dig the plant out of the ground and drop it from waist height to see where it breaks.  With a knife make clean cuts where the breaks are.

Some plants, such as iris, coreopsis and Shasta daisies, benefit from division and may in fact die over time if they are not divided.  Others, like daffodils and peonies, need never be divided.

Layering—Sometimes this happens unwittingly when the branches of a shrub hit the ground and then over time grow roots in that spot. To do it deliberately, pull a branch of your favorite shrub to the ground and bury it in soil, making sure it stays attached to the parent plant.  When roots form and there’s evidence of new growth on the section that is separate from the original plant, sever the stem with a shovel and dig around the roots of the new plant. Remove and plant somewhere else.

Grafting – This is a more challenging form of asexual propagation.  All fruit trees are grafted. A hardy root stock serves as the base, passing water and nutrients up to the top of the plant where a more desirable, less weedy, plant has been grafted on.

With a little knowledge and a desire for experimentation you will find propagating plants is a fun and easy way to expand your garden.