In the process of creating a successful public private partnership between a garden club and a state park in NY, a historic section of the Hudson Valley Highlands was reinvigorated with native plants, and a pollinator community of bees and birds was established.

In addition, the contribution of Jane Colden, America’s first female botanist, was given a voice. Colden, who left behind a voluminous manuscript of her botanical notes, with outline drawings of leaves, lived in NY’s Hudson Valley region during pre-Revolutionary times, and was an enthusiastic student of botany under her father’s tutelage. Eventually she learned the Linnaean system of classifying plants, and her manuscript remains a snapshot in time of the flora of her native New York.

During the Revolutionary War her manuscript fell into the hands of a Hessian soldier who was a forester and interested in native American trees. He brought the manuscript back to Germany and it was later purchased by Sir Joseph Banks, the renowned British plantsman. Today it sits in the British Museum in London.

Approaching the Bear Mountain Trailside Museums and Zoo back in 2014, members of The Garden Club of Orange & Dutchess Counties (O&D GC) proposed to help revitalize sections of the 40 acre Trailside site within the 5,000 acre state park. Host to 100,000 visitors per year, Trailside was the perfect location for a garden club project promising lasting benefits to a sizeable community. At a time when government cuts were leading to huge staff reductions at the Park, representatives were receptive to a collaboration.

“We proposed Jane Colden as a theme for the gardens at the site because she is an inspiration to young people, and a wonderful role model for girls,” says Jeannette Redden, one of the garden club members who made the initial proposal to Bear Mountain.  Jane Colden spent most of her life just 20 miles north of the site of the present day garden created in her name, and in 1963 the Garden Club reproduced excerpts from her manuscript (50 plants with accompanying drawings) and printed hard cover copies of the illustrated book for its members.

The garden club’s proposed project dovetailed with Trailside’s own mission to educate visitors about local natural history and inspire curiosity and reflection in nature. While the original Trailside gardens featured local flora and interpreted the park’s rich biological diversity, sadly time and invasion by non-native species had eroded much of this intent.

Work started in the Spring of 2014 to renovate an area called the Shrub Thicket.  Worn and invasive shrubs were removed, landscaping was planned, and compacted soil was amended. Native shrubs were planted to establish a shrub thicket garden including a riffle stream and pool to create habitat for diverse wildlife.

Working with Trailside’s staff horticulturist, a full season of flowers and fruits were selected to support pollinators. Jane Colden’s manuscript is one of the earliest detailed records of native plants local to New York, so when possible an attempt was made to use plants that she described in her manuscript. Identifying the plants by their current names, however, is an ongoing project. For example, what Jane identified as American white honeysuckle later became Pinxterbloom Azalea, which is now Rhododendron periclymenoides.

Native perennials planted among the shrubs provide flowers in summer up until frost, with pollinators visiting species of Asters, Solidago and Asclepias.

Pollinators to the planted shrubs and perennials are mainly insects, especially bees. Hummingbirds are specifically attracted to the scarlet Cardinal Flower (Lobelia cardinalis). Seeds of L. cardinalis have been collected from the wild (through supervised collections) and seedlings propagated by O&D GC members have been added to the plantings. Other birds have some role as pollinators; many of the planted shrubs provide them with fruits and seeds for their main food source.

Work on the Pine Grove (‘Sunny’) Garden where we photographed Jeannette for the Womanswork catalog, began in 2015. The site extends out from a stand of white pines into a grassy slope with dramatic Hudson River views.  Native plants local to NY were chosen for their adaptability to the sunny location, and include Northern Bush Honeysuckle (Diervilla lonicera) and many perennials, including Butterfly Weed, Lupine, Asters and Goldenrod. Witch Hazel (Hamamelis virginiana) and Mountain Laurel (Kalmia latifolia) were planted in background shade under the trees.

Working with native plants has numerous benefits, no matter where you work with them. Whether native Massachusetts plants, New York native plants or any others, all have their own benefits.

The Challenge of Sourcing Native Plants

Sourcing plants was like a treasure hunt. Ultimately the group found their best source at Catskill Native Nursery in Kerhonkson, NY, and Broken Arrow Nursery in Hamden, CT.

It fell to volunteers to plant and maintain the garden. Volunteers from the garden club as well as others, in groups of 3-7 at a time, assemble for planting in the spring and fall. They also weed and remove invasives when necessary. Seeds are collected and some plants are grown from seed indoors during the winter.

O&D GC members are happy to report that the gardens have attracted pollinators and birds, and this summer Monarch caterpillars were spotted on the butterfly weed. These are signs that a friendly habitat for wildlife has been restored at Bear Mountain Trailside Museums and Zoo and a successful public private partnership has been formed.

Below: Jeannette Redden of The Garden Club of Orange and Dutchess Counties at the Pine Grove ‘Sunny’ Garden wearing Womanswork Tick & Bug Blocker Gloves, Raffia Hat and Mosquito Head Net rolled up on the brim of her hat. 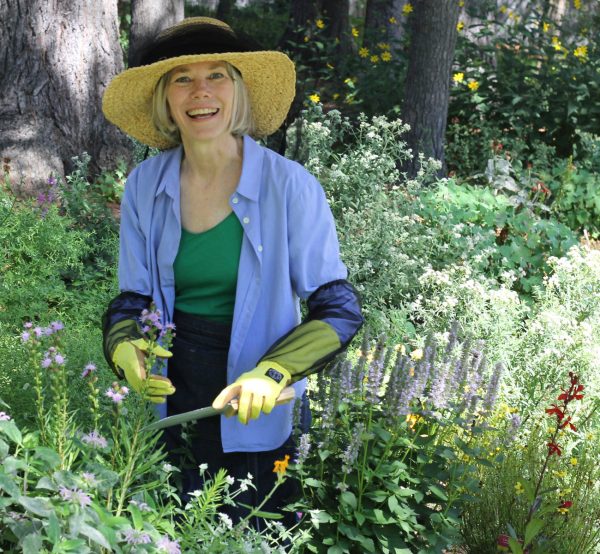