If I had to choose a favorite fall shrub it would be callicarpa dichotoma, also known as beautyberry. 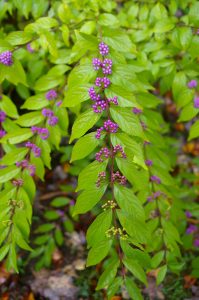 Its arching branches with opposite leaves      (meaning the leaves are symmetrically placed on the branch instead of placed in alternate sequence like most plants) are graceful, elegant. Add      to that elegance a compact cluster of berries that appears on the branches in summer and becomes purple in early fall, and you have a standout    plant.  Callicarpa is desiduous, but even after the leaves drop off the purple berries persist. 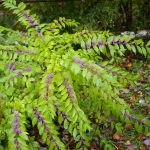 I bought my beautyberry last fall on sale at my local garden center. It was in a one gallon container and I put it in the          ground in October and then moved it to a new location this spring when I needed the original space for a low stone wall.    In just one season it became a lovely, 3’ high and wide shrub that will continue to get larger each season. Because of its      arching branches it’s nice to underplant with a low plant or ground cover that likes dappled shade. Bigroot geranium          comes to mind.

Here’s another great feature of beautyberry. It’s deer resistant!  In Ruth Rogers Clausen’s book “50 Beautiful Deer-              Resistant Plants”, with photographs by Alan Detrick, she claims that deer may nip off one or two flowers but don’t care for the berries or                    pungent leaves and will mostly ignore it.

I saw a taller variety with white berries called callicarpa albifructa. I thought it was interesting but not as dramatic as the dichotoma,  with its purple berries.

If you want to propagate callicarpa, it’s a little tricky like all woody plants are. If you select a stem that is too woody new roots will not be able to penetrate through the bark. It’s best to try it in summer when you can work with young shoots. Dip the tips into rooting hormone and bury in sterile, moistened potting mix and then cover so they’re not exposed to light. 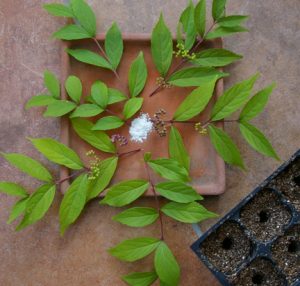 Wait up to 6 weeks and give the cuttings a tug to see if they have developed roots. If they resist pulling out of the potting mix, they have roots! If they pull right out with no resistance, they don’t.  If they have roots replant in a larger container and let them grow.  Last weekend I decided to give it a try, even though it may be the wrong time of year to do it. My cuttings are now sitting on a heating mat in my greenhouse, under a layer of cardboard for shade. We’ll see. I’ll let you know what happens. 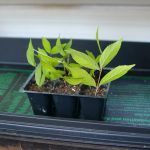