Earlier this month, I had the privilege of visiting George Washington’s Mount Vernon Estate in the beautiful State of Virginia. (I had not been there since 8th grade!)  This historic landmark was Washington’s home as well as his resting place, and is the most visited historic home in America.  Over the years, it has been well preserved by The Mount Vernon Ladies’ Association so tourists may come and learn history and marvel at its beauty. While there were many breathtaking structures and natural wonders here, the gardens were of particular interest to me. Here we’ll take a closer look at the Mount Vernon gardens. 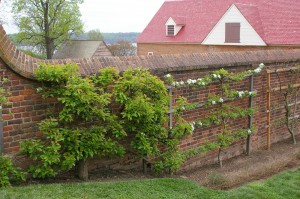 Historians report that George Washington was an avid gardener and farmer who spent countless hours improving his land. Even as the Revolutionary War was in full force, he would find time to make his way home to work in his garden for brief intervals, or send detailed planting instructions to his gardener. He believed that the future of America depended on a strong agricultural economy.

The lower garden (AKA southern garden) is nestled between the storehouse and clerk’s quarters. It features an array of fruits, vegetables and herbs growing down a well-manicured path. On the south end of the garden, there’s a stable where horses are kept. The previous burial site of George (known as the Old Tomb) is also located towards the Potomac River not far from the lower garden.

His gardens were walled gardens to keep out pests. (Sound familiar?) But the clay bricks, made on his property from Virginia soil, also functioned to raise the temperature inside the walls and create a warm micro climate.  He also used the walls to espalier fruit trees, which was a space saving and perhaps decorative way to grow apples, cherries and pears. 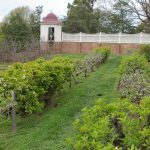 The upper garden (AKA northern garden) is located to the north of George’s estate and is bordered by a large, fully-functional greenhouse. Just two years ago, horticulturalists worked to transform the upper garden into its original 1799 layout. Tourists visiting the upper garden during the spring will be pleasantly surprised to see a lush, vibrant garden that’s full of colors. It features a French style parterre garden, perhaps a tribute to George’s close association with the Marquis de Lafayette. George Washington never traveled abroad during his lifetime, but his gardens show that he was well versed in traditional French and English garden design.

When George Washington returned home in 1797 after serving as President for 8 years, he threw himself into Mt. Vernon’s five farms and the gardens close to the main house. Sadly, he had only two years of retirement, dying suddenly in December, 1799.

There are 3 trees on the estate that were planted by George Washington, or by others during his lifetime.  The one shown below is a pecan tree planted by the Mt. Vernon Ladies Association in the 19th century.

Hopefully, this will inspire you to see George Washington’s Mount Vernon Estate for yourself. It’s a historically rich site that is loaded with beautiful plant and wildlife. 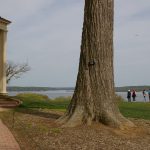