No other shrub personifies the brash exuberance of spring like forsythia. At this time of year it is blooming in almost every garden as hedges, clipped and unclipped, along roadways, and even on the edge of woods. Sometimes it looks wonderful, but at other times it is obviously a case of wrong plant, wrong place.

Forsythia shrubs have a beautiful, naturally elegant habit that is destroyed by formal clipping, but so often is sheared within an inch of its life as a trimmed hedge or rounded blob in front of a house. 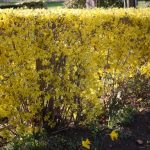 Regular pruning immediately after bloom time is necessary to keep forsythia looking its best. Most blooms are borne on wood made the previous season. Young, light greenish brown bark stands out against older stems that are gray. The latter produce young side shoots that bear flowers.

Protect your hands from scratches wearing your Womanswork gloves – I like the original work glove. Pruners must be sharp so that you don’t tear the bark at the cut.  Dramm has a nice lightweight hand pruner that I use for thin branches but for heavier stems I prefer Fiskars Power Gear Pruners with rolling handles. Aim to cut out as much of the old wood as you can without leaving the shrub too thin. It is a good idea to prune out 1/3 or so of the bush each year. If possible cut out old wood to the ground or as far down as you can till you reach a node where a new young shoot is emerging. As usual prune out any dead, damaged, diseased, or dying wood as well, along with crossing branches. 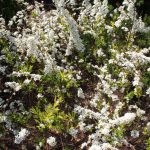 If forsythia is too present in your neighborhood already, there are other old fashioned shrubs that are less “in your face”. One of the best is old-fashioned mid-spring blooming Thunberg spirea (Spiraea thunbergii ) that produces an abundance of white flowers. It is often called bridal wreath or bridal veil. This illustration is of a more modern selection, S. thunbergii ‘Mellow Yellow’ or ‘Ogon’ that sports beautiful yellow young foliage. These both require similar but less drastic pruning after bloom time to avoid an open center and tangle of old wood. This and other spring shrubs will grace your yard and give you years of enjoyment.