We spoke with Lisa Ringer of Two Pony Gardens in Long Lake, MN about how she prepares for the dahlia season. Many parts of the country are experiencing a late spring, so her advice on how to lengthen the growing season is particularly relevant this year, even to non-Minnesotans.

Here’s what she told us, commenting that she has two feet of snow on the ground and it’s the middle of April (!)  This is not typical, even for Minnesota.

Since Lisa’s growing season can be cut short by a mid-September frost, she does some things to ensure earlier dahlia blooms.

“In early April I pot up my tubers in gallon pots with a soil-less mix with lots of bark in it,” she says.  “I haul the crates out of storage, leave them at room temperature for a week or so before I plant them to let them wake up. That way I can see which tubers have eyes, which just look like tiny bumps. I sprayed all the dirt off in the fall before I divided them. 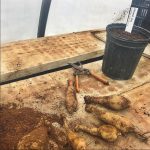 I like to pre-start the dahlias. I have the luxury of a ‘rustic’ hoop house, barely heated to fend off nighttime frosts. I think a barely heated garage would work also. It seems to take weeks for shoots to finally appear. I keep them pretty dry until they are actively growing with the warming days. I like to do it this way because once planted in the ground I can see where they are in the chaos of my garden.

Because I grow over 600 plants I divide up the clumps in the fall to capitalize on storage space. I store about 7 cut up tubers of one variety in an unsealed plastic gallon storage bag with a handful of slightly moistened peat moss (with a pinch of cinnamon mixed in to stall off rot). They are placed in alphabetical order ‘Akita’ to ‘Zorro’ in black plant crates that are easy to stack, label and store. 45 degrees is the optimal temperature. I check stock midwinter to check for rot or dehydration.”

Whether you divide your tubers in the fall, as Lisa does, or in the spring, the key is finding the eyes and making sure each tuber has at least one. Lisa says “It is hard to believe that all one needs for a big husky plant is one single eye on one single tuber.”

After getting Lisa’s advice I pulled my own tubers out of the box they were stored in over the winter. I had not divided them so I started to look for the eyes as I prepared to divide them.  I found it quite difficult to identify the eyes. Here is my guess on one of the tubers I cut apart from the clump. I put this question out there for anyone who wants to answer it:  “Is this an eye?”