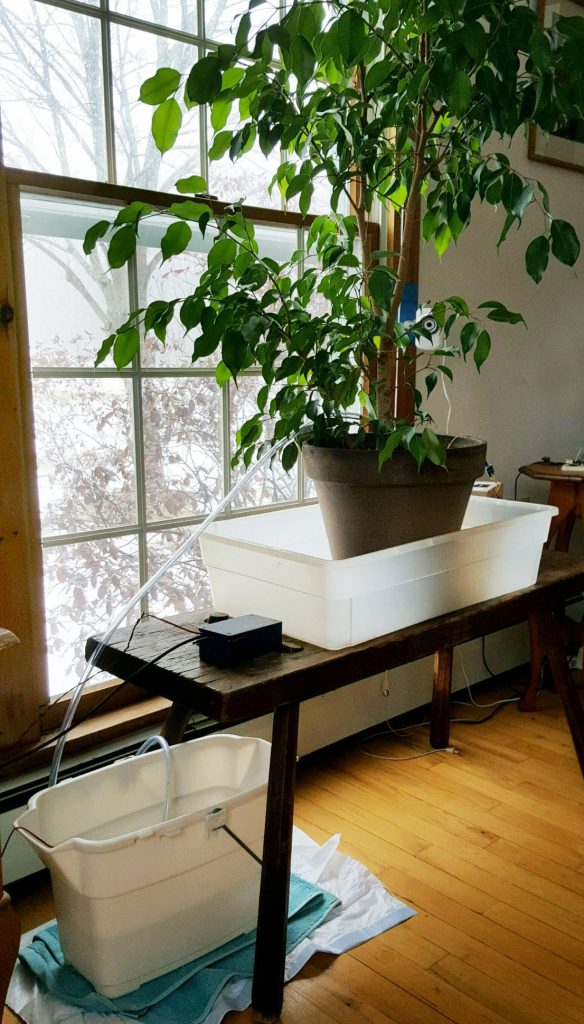 The system developed by my brother Geoffrey allows him to water his favorite ficas tree from anywhere in the world. First he logs onto the web page he set up to monitor all of the controls in the process. Then he looks at his moisture sensor to see if he needs to water his plant. If the plant needs water he turns on the video camera so he can watch the water going into the pot. Then he turns on the water. He turns the water off when the moisture sensor says he has watered it enough. Finally, he turns off his camera.

What makes it all work is a wifi connection and some simple lines of code, which he wrote. The whole system (not including his beloved ficas plant) cost him no more than about $50, including $15 for the computer (Nanopi-Air), $12 for the tube and $9 for the pump. (He had the camera so didn’t include that in his costs.)

Here are the mechanics, though the finer points will have to be figured out by the computer savvy readers of “The Curious Gardener.”

1) Get a bucket to hold the water you think you’ll need for the time you will be away. Geoff got a 10 liter bucket since he will be away for at least a month. Fill the bucket and set it on the floor next to your plant.

2) Purchase a clear plastic tube and run it from the bucket to the surface of the soil in the pot.

3) Purchase a small pump (his is half the size of his fist) and place it in the bucket attached to the tube to push the water up through the tube.

4) Geoff set his plant in a plastic bin to catch any water overflow. Since his remote watering system has not been fully tested, this is insurance in case he is not able to shut off the pump remotely for some reason.

5) He installed a cheap web-based video camera taped to the wall with a close up view of the tube going into the plant. The camera is plugged in to avoid battery failure. The camera turns on at his command (remotely of course).

6) He bought a cheap ($15) computer (Nanopi-Air) which is in a little box sitting next to the plant. Attached to the computer are wires going to the power source, to the pump in the bucket of water, and to an antenna connected to wifi, which controls the whole operation.

7) He also purchased a soil moisture gauge online which has a wire that is connected to a micro controller (ESP 8266) with a wifi connection. The moisture sensor is buried in the soil and Geoff can read it remotely.

8) Finally, what makes this work is the code Geoff wrote to operate all the parts, which he has set up on a web page for monitoring. He says it is ‘simple code’ (but he does have a doctorate in physics).

Trouble Shooting: Geoff learned about a flaw in the system which he corrected right away. One morning he was checking the moisture gage from his home in NYC and noticed it had spiked moments earlier. He turned on his camera and saw that the water was running into the pot, even though he hadn’t turned it on. He immediately turned the water off remotely. When he looked again at his camera he noticed there was a person standing there. He figured out it was the person who was called in to fix their furnace system and he had turned off the electricity to do repairs. When the electricity was turned on again, the computer had to reboot. In so doing it turned the pump on. He fixed it so that the pump doesn’t turn on when the computer reboots (if they should lose their power while he’s away). 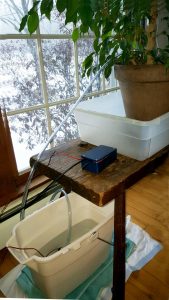