Stephanie Hall is part of a growing trend in the florist trade to source flowers locally and in season. Her farm in North Carolina, Sassafras Fork Farm, has a two- acre plot dedicated to approximately 70 different varieties of cut flowers. Says Hall about the farmer-florist movement, “It’s a stark contrast to the conventionally grown, imported flowers of the commercial floral trade.” 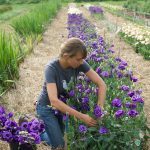 Stephanie grew up in Chapel Hill, the daughter of a UNC professor.  In 2011, she and her (just retired) father decided to start Sassafras Fork Farm, named for the native tree. The 150 acre plot of land had been in the family since 2000, an old tobacco farm that had not been in production for over a decade when they purchased it.

As soon as Stephanie started growing flowers she felt a deep connection to them. Says Hall, “There is a nostalgia I feel when I’m picking and arranging them that connects me to the past.” The growing season in NC is long, from April to the end of October, and she has been able to extend it further through the use of high tunnels and a passive solar greenhouse for seed starting.  Only two months, December and January, are off limits to her, without a heated greenhouse.

As a result of her love of growing flowers, the farm’s priorities have changed.  Instead of focusing on a great diversity of produce, there’s much more focus on flowers, which they call the “Petals” part of the business.  Her father spends more of his time cultivating year round pastures for the cows, sheep and chickens, raised for grassfed meat, eggs and wool. But he also helps her by foraging for wild greenery, such as sassafras, wild blueberry, ferns, millets, sourwood, honeysuckle and river oats, which she uses abundantly in her arrangements. 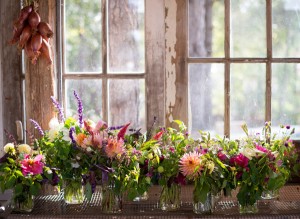 Stephanie credits two formative events with helping her connect with others who share her passion for flowers, and giving her the confidence to stay the course. “Until I joined ASCFG [Association of Specialty Cut Flower Growers], “I used to think flowers would only be a small part of our business, but now I feel otherwise,” says Stephanie. At ASCFG conferences she is reminded that there are growers all across the country like her, who are making a career of growing flowers.

The other thing that made a huge difference was meeting Erin Benzakein, founder of Floret in Washington’s Skagit Valley. In 2014, Stephanie attended Erin’s first “Farmer-Florist” workshop, and in 2015 she was invited to help with two workshops there. She says, “Through Erin I found the importance of cultivating beauty within my life as well as all the lives our flowers touch.”  At the workshop she learned about intensive growing methods, producing more high quality blooms in a smaller space, seed starting, compost tea, marketing strategies and floral design skills.

I asked Stephanie what some of her favorite cut flowers are. They are ranunculus, anemones, allium, old-fashioned scented narcissus, peony tulips, dahlias and poppies. When I mentioned that poppies are not something one typically sees in traditional floral arrangements she agreed and said that poppies really need to be grown locally. They won’t survive a long flight across country or across international borders. 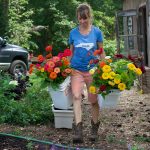 She gave me these tips on conditioning poppies: 1) Stage of harvest is critical: Cut the poppy when its buds are just splitting open. Always cut in the morning when stems are filled with water. 2) Post harvest treatment is the 2nd most important thing: Heat sear the ends with a flame OR boiling water for about 5 seconds and then put in fresh water. Following these steps you can get 5 days from your poppies.

These days three quarters of Stephanie’s floral business is selling to other florists in the area (“Many of them are jumping on the bandwagon and want locally grown flowers”, says Stephanie), farmers markets and specialty grocery stores.  Stephanie is growing into designing for events, including weddings. When Stephanie was a bride herself just a year ago, they built a barn at the Farm to host her wedding.  They plan to hold ‘farm to fork’ dinners and other events there in the future. But she wants to take it slowly. She’s following her heart, and is grateful for the passion she’s found in flowers. 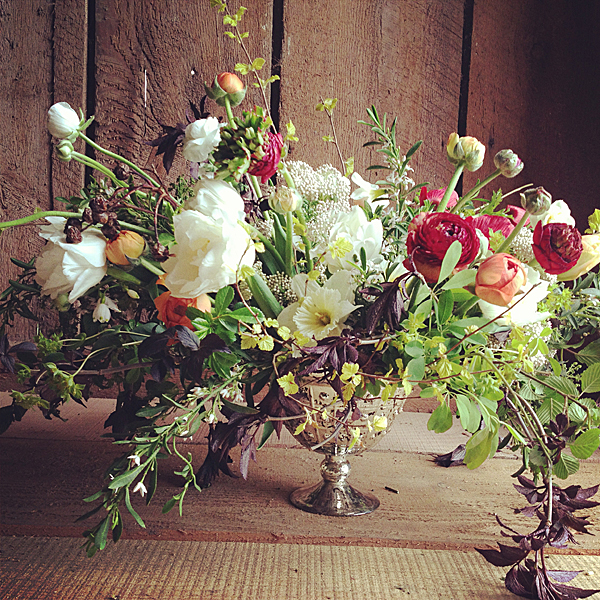 To learn more about Stephanie Hall and Sassafras Fork Farm, order our free Womanswork catalog here. This article was written by Dorian Winslow of Womanswork.

3 thoughts on “Farmer-Florists Bring Flowers Fresh From the Farm”